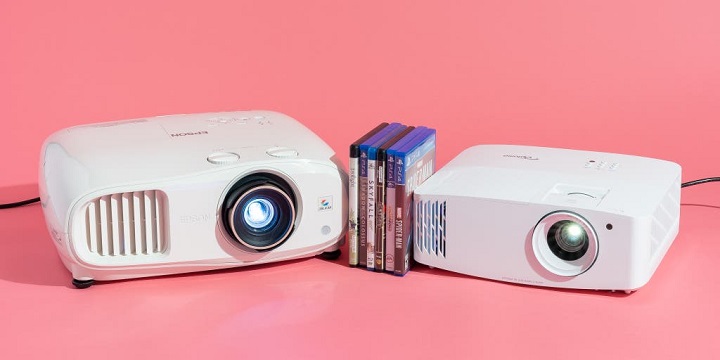 Welcome To My Post “Best 4K Projector Reviews 2022″4K image quality is very popular these days and is itself starting to become the norm for everything we get. Although many people still prefer a television, beamers are a popular alternative. In this article we look for the best 4K beamers or projectors.

These 4K beamers are still very expensive for the time being, you need a budget for this. Also remember that a projector and a projection screen often go hand in hand. If you have a nice, even light wall, you can postpone that purchase for a while.

According to our research, the Acer VL7860 is the best 4K projector for most people.It has very good image quality with a high contrast ratio and can be used in illuminated rooms. To get to a 4K resolution, it does use pixel shifting. A native 4K beamer such as the JVC DLA-N5BE does not use pixel shifting but is a lot more expensive.

Under our suggestive top 5 best 4K projectors, also view the research, how to choose and what you should pay attention to when buying a good projector. 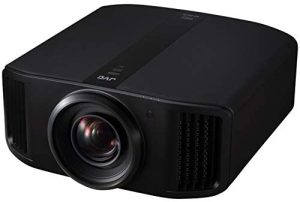 The JVC DLA-N5BE is a native 4K beamer that does not use pixel shifting or video processing. It has a great contrast ratio, rich colors and excellent details. The dynamic tone-mapping of the projector’s HDR signals is excellent, preserving all the details.

The high contrast ratio ensures true-to-life colors and realistic image reproduction. It uses a Direct Drive Omage Light Amplifier or D-ILA. The advantage of D-ILA is that, unlike DLP, it has no mechanical parts, which means that the projector lasts longer.

The image quality of this JVC projector is a lot better than that of the Acer VL7860 but for almost double the price it is difficult to recommend to everyone.

It supports almost all the wider DCI/P3 color gamuts currently used for 4K content, so you’ll see richer reds, blues and greens. The motorized lens system and built-in picture settings make it easy to install the projector yourself.

It is very heavy with 19.6 kilograms and it is also very large and less suitable for moving often. So think carefully about where you are going to install the beamer and make sure you have a sturdy bracket to install it.

The DLA-NX5 comes into its own in dark rooms because it only has 1,800 lumens. This makes it less suitable for use in a well-lit living room.

The best 4K projector according to our research is the Acer VL7850. It has a good price-quality ratio and is suitable for use in both dark and illuminated rooms. Its contrast ratio is a lot higher compared to other 4K projectors.

Contrast ratio shows the difference between the lightest and darkest images. The higher the contrast ratio, the more realistic your image will look.  The native resolution is 3840 x 2160pixels (=4.14 million pixels) but by using double pixel shifting a 4K resolution (8.3 million pixels) is achieved. This means that two half 4K images are projected very shortly after each other to create a 4K image.

In other words, you can use this projector for 20 hours a week for at least 20 years before it breaks. The light source cannot be replaced when it is worn out, but given its long lifespan, we do not see this as a problem.

An additional advantage of this type of light source is that it can achieve a high lumen value. With 3,000 lumens, this projector is also suitable for displaying a clear image in illuminated rooms. That is why the Acer VL7850 is also suitable for office spaces where there is a need to project 4K images.

The LG HU80KSW is a portable beamer with high image quality. It has a completely different design compared to traditional projectors. At the top there is a handle so you can easily move it and the wire for the socket can be neatly tucked away at the bottom.

There is a mirror under the lid of the lens. This allows you to project images from 66 inches to 150 inches both on the wall and on the ceiling. And because it is equipped with a laser as the type of light source, you can count on a lifespan of 20,000 hours. In other words, you can use it 20 hours a week for 20 years.

With 2,500 lumens, it is suitable for use in a lit room, but of course you get better image quality in a darkened room. But the big advantage of the LG HU8°KSW is that you can stream content very easily because it is equipped with built-in WiFi.

This way you can download Netflix or YouTube and immediately play content via the beamer. But you can send content from your smartphone, tablet or laptop to this beamer without a cable. But HDMI ports are also provided to connect physical devices such as a decoder or Playstation.

In terms of image quality and contrast ratio, it is not as good as other projectors within the same price category. That is why we can only recommend this projector to people who are looking for a device that they want to use in different rooms. 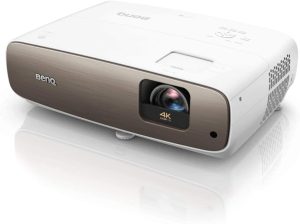 The BenQ HT3550i is a 4K projector with a short-throw lens that allows you to project very large at relatively short distances. It’s relatively compact, so you can put it on the coffee table and watch movies. It also has built-in speakers so you don’t have to connect it to a sound system.

For a better sound experience, we recommend connecting it to a soundbar or a surround sound system. It has a light intensity of 2,000 lumens, so you can use it in lit rooms if you want. In a darkened room, the images will of course come into their own better.

As is the case with many 4K projectors, this BenQ projector uses quadruple pixel shifting to achieve a 4K resolution. And given its price, we think it has very good image quality. It also supports DCI-P3 and HDR10, which we have only seen in beamers that are twice as expensive. 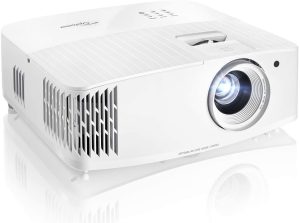 The device has a good contrast ratio, 500000, much better than ordinary beamers within the same price range. You can also use the new 3D technology to play movies in 3D. You connect via HDMI, MHL or VGA connection. There is no WiFi connection possible.

Because it has 3400 lumens, it is best to use it in the darkest possible room. But it can still be used in a living room, provided you can limit the incidence of light. It uses a regular lamp that lasts 4,000 hours in normal use and 10,000 hours in Eco mode.

This is shorter compared to lasers, but replacing a lamp is still quite affordable. With an input lag of 39ms, it is even suitable for gamers who prefer a beamer instead of a screen. You can connect a Playstation 4 Pro to it and fully enjoy 4K gaming.

In this article we look for the best 4k projectors you can buy right now. Our focus in this article is mainly on beamers that are made for watching movies and series.

Business projectors are cheaper and brighter, but that’s because these projectors are designed to view PowerPoint slides in a conference room with a lot of sunlight. Should you opt for such a beamer to watch movies, you will quickly notice that the colors do not come across as realistic.

Since there is little benefit to projecting your PowerPoint slides in 4K, the beamers we discuss here are mainly aimed at people who want to install a Home Cinema at home and want the best of the best at a reasonable price.

Beamers with 4K resolution and HDR support are pricey, but they do provide the best image quality that you can currently get from a beamer.

These 4K beamers are best mounted on a ceiling because their weight and size make them less suitable for standing on a table in your living room. They are heavy models, so it is best to install them permanently somewhere.

To enjoy the best image quality, make sure that the room in which you set up the projector can be properly darkened. We also recommend investing in a projection screen.

Many people want to put as much budget as possible into the beamer and then project on a white wall. That is a shame because you lose a lot of image quality and contrast by projecting onto a wall.

All beamers in this article use DLP technology. DLP projectors use more than a million mirrors to shine light through a transparent wheel of colors. The advantage of this technology is that pixels are closer together and the grid is much less visible.

Furthermore, DLP projectors can achieve a much higher contrast ratio compared to LCD or LED projectors. This makes dark colors like black look much more true.

You will notice that black colors with a projector with a low contrast ratio are more likely to turn out gray, which is at the expense of image quality. A nice bonus is that DLP projectors usually last longer than LED or LCD projectors.

The biggest disadvantage of DLP is that these are the most expensive projectors and that they can produce a less bright image.

This makes them less suitable for use in a room with a lot of light, such as the living room (unless you can easily darken the room). To read more about the technology behind DLP you can read the Wikipedia article on DLP.

Pixel shifting is a technique in which beamers produce only a part of the pixels and then enlarge them to imitate a 4K resolution.

There are only a few beamers with true 4K resolution and these are not yet sold in Belgium. By true 4k resolution we mean a beamer that can produce a resolution of 3840 x 2160 (8.5 million pixels) without using pixel shifting.

Brightness determines not only how ‘bright’ your image will look, but also how large you will be able to resize the image. The smaller you set the image size of a beamer, the sharper the image will look. projectors with a low brightness usually produce a lower image size because they lose sharpness.

Brightness is especially important when the room in which you want to use the projector cannot be completely darkened. If you are looking for a beamer, keep in mind that for a 120-inch image you ideally have 2500 lumens, for a 100-inch image, beamers with 2000 lumens are sufficient.

The contrast ratio is something that differs greatly from beamer to beamer. Even though different specifications are thrown around, you can’t really trust what is put on paper. A high ‘contrast ratio’ means that black looks very dark and white is very bright.

The models we’ve included in this article don’t have the best contrast ratio as we went looking for budget-friendly projectors. But that doesn’t mean there can still be big differences between similarly priced models.

Usually we can provide a minimum value so that you can check on the specification list whether a particular projector meets your requirements. Unfortunately, the reality is that two projectors with an identical ‘contrast ratio’ on paper will have a different ‘contrast ratio’ in reality. The only way to ensure you get your money’s worth is by reading reviews like this one.

Color is important because it makes your image look realistic. Some projectors save on color, so they can’t display true colors.

If you do not intend to purchase a screen for projecting, it makes little sense to dwell on the color of your beamer.

A beamer can only project truthful images on a white screen and not on a wall. Fortunately, a screen today does not take a big chunk out of your budget.

Must Read My Previous Article